Original novel in Chinese by: 御我(Yu Wo)

Xie Wei: Sunset City’s new captain of the police squad. He seems to have the support of an unknown force.

Father Yue: Yue ¬Gang’s father. Also the priest of the only church in Sunset City.

I find that I seem to be reiterating this statement a lot. Although this really does feel like the final volume, it really isn’t, thanks.

During the planning stage, I was already worried about this. The ending to this volume really does feel like it could be the conclusion… As such, I had considered whether or not I should write this volume so I could delay it and place it as the conclusion, or whether I should just continue and write it all out?

In the end, I continued and wrote it all. The reason was very simple. I really wanted to write it.

As for how I will write the conclusion in the future… In any case, when the boat gets to the pier-head, it will naturally straighten with the current. The next ending will always be better, so it doesn’t matter.

People should be optimistic! (Vampires too!)

The future will always have a young master waiting for you!

This volume broke my record of having my word count explode on me. The explosion totaled to 13,000 words. It was such an explosion that the pieces of my soul have been scattered. I’m just so overwhelmed.

Exploding word counts will always happen when the deadline looms before o¬ne’s eyes!

But since it has already exploded, I can only let it explode to death.

Sorry, my speech is a little incoherent. I’m truly a little high because I really quite like this volume. Not only have I finished writing the main idea I had planned, while I was writing, there were even more plot points that resulted that I really liked. Even with the record breaking exploding word count, I’ve accepted it.

It’s also true that as I was writing and saw that the word count had already ballooned past my limit, yet I still couldn’t turn in the manuscript and finish writing, I was inwardly despairing.

But no matter what, stories will always be finished.

I hope that everyone likes this volume as much as I do.

Also, for those readers who mistakenly believed that Charles had actually died, and therefore bawled for three days before reading the last chapter, please do not come and beat me up. It’s possible that the point of view protagonist might die, but that book would definitely not be written by me.

I have pretty much finished detailing Charles’s past. If I want to write about it in even more detail, I might do it in a different book. That book would be called EX. or I am EX. The Chinese translation of the book title is “Example” or “I am Example”… Please don’t believe what I have just said. It’s possible that there might be a book called Example or I am Example, but that book would definitely not be written by me.

EX. refers to the character E.X. As for when this book will appear—In any case, before Yu Wo turns thirty, she will definitely finish filling in the holes she has previously dug!

(However, Yu Wo is forever only eighteen.)

The Undisclosed Castle Secrets at the very end will be different depending on how often and how much the author’s brain snaps. Whether or not it will happen again and how many there will be will all be different.

Finally, according to No Hero’s unwritten custom, I always have to announce the subtitle of the next volume to whet everyone’s appetite. Otherwise, you would all roll around on the floor and declare, as if your life depended on it, “This isn’t Yu Wo; this isn’t Yu Wo.”

Our young master has graduated. Following that, what will he do? The options:

1. Master: You can consider being captivated by wine and women and be a prodigal son. Help me spend the money I have that I can’t even count?

2. Charles: Whatever you wish, as long as it will not be fatally dangerous. It is not an easy feat finding the ideal master. Young Master, please do not ever die on me.

3. Aren: I want you to throw away all the plush toys in your room and switch to putting up posters of big-breasted beauties in swimsuits to cure your pedophilia!

4. Briar: Wait until I grow up, and then we’ll marry. You’re not allowed to have an affair in the meantime.

5. Ji Luo Chu: Don’t become any more famous. You’re making me so busy that I barely have enough time to be First Wind.

n. Do all of the above backwards. 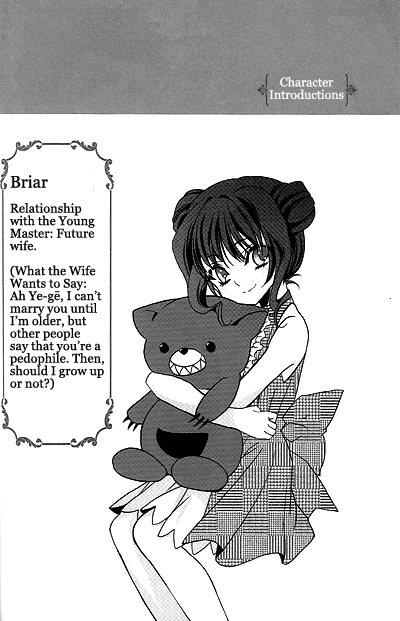 (What the Wife Wants to Say: Ah Ye-gē, I can’t marry you until I’m older, but other people say that you’re a pedophile. Then, should I grow up or not?)

Relationship with the Young Master: Playmate.

(What the Playmate Wants to Say: Young Master, I’m willing to play everything with you, but please don’t ask me to play with your teddy bears with you.)

Relationship with the Young Master: Making fun of Dell together.

(What He Wants to Make Fun of: Don’t worry, the young master only has Winnie the Pooh.)

Can I use tears
to exchange for your smile?

My Tears, Your Diamond
X-diamond

Even a boy, once he uses this lipstick
can become as beautiful as a budding flower.

Final Angel of the World 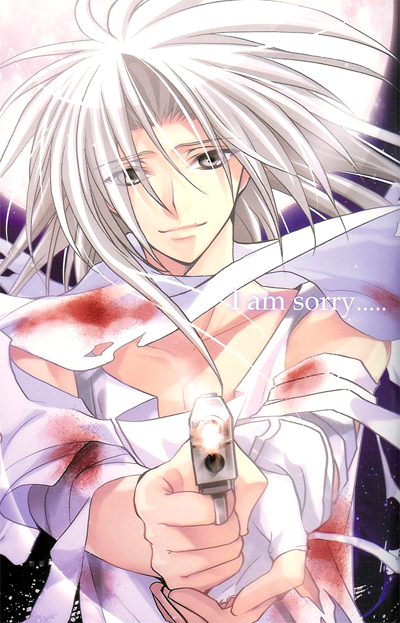 Shoot you… I would rather fall.