Original novel in Chinese by: 御 我 (Yu Wo)

Avexila Endelis: Charles’s mother, a fifth generation vampire. She is also the head of the Endelis clan.

Anceo: The leader of one of the teams from the Church’s Sin Elimination Committee.

Yina: A member of one of the teams from the Church’s Sin Elimination Committee.

This was yet again a plot puzzle with a bunch of random pieces, which nearly made the author want to commit suicide by face-planting in tofu.

It looks like this will more or less be the style that No Hero takes. By that, I mean that each time I write No Hero, I will suffer through the pain of piecing together the huge puzzle that is the plot.

Although I previously announced that this volume would reveal Melody’s and Charles’s pasts, in the end, I realized that I didn’t really cover much of that. Instead, a bunch of unresolved hints at their pasts showed up… I didn’t even completely finish writing the planned matters involving Gong Feng Xiang and Curtis.

You can all find hints in the character introductions—Charles’s mother hasn’t even shown up yet, but she’s included in there! His mother was supposed to show up in this volume, but I didn’t even get around to writing about her!

The word count completely exploded on me in this volume. My original plans for the plot seemed to cover too much. Even after my writing exploded on me, I still couldn’t finish writing it. I can only ask everyone to please forgive me! This volume actually doesn’t have a true ending, and will have to continue into the next volume before there is one.

Also, the next volume will definitely reveal the pasts of Charles and Melody. Definitely! Please, don’t use tofu to hit me!

The third volume of No Hero can actually be considered a divider. Starting from the next volume, it will be very different. First is the change in the subtitles:

Actually, when I list them out like this, you should be able to guess it more easily. Vampire Butler refers to Charles. The Hero Grim Reaper is An Xiang Ye. Non-Human Killer is actually Melody. (A side note: Some readers have asked me how to pronounce Melody’s name, Yuè Yīn (樂音). Just how is the first character樂pronounced? Actually, all you have to do is pronounce “music (音樂, yīnyuè)” backwards!)1

With three volumes done, I have also finished introducing the three main characters! So, the next volume’s subtitle will not follow the same format as the first three volumes.

The second difference is, starting from that volume, the books will include side stories. The side stories will not use Charles’s first person POV, but will use other ways to show the story to make up for things that Charles cannot see.

If I keep on using only Charles’s POV, the author will really need to use tofu to replace her exploding brain.

(Noodles! Where are the noodles? I want to hang myself!)

In addition, No Hero might have six volumes because after writing so far, I’ve realized that I might not be able to finish in five. There are still a bunch of things I haven’t addressed.2

However, this refers to the main story. Once the main story ends, I might write some side cases. The side cases would not come out regularly, and I don’t know how many volumes they would be, but each volume would have its own ending.

These are my current plans for No Hero.

I had originally wanted to talk about some things regarding my intentions behind this volume, but after giving it more thought, since this volume continues into the next, I should keep it to myself for now. Otherwise, when you read volume 4, or even if you can’t read the story, you might already guess what the main topic for the next volume will be.

This volume is slated to be released just after the New Year, so I’ll take this chance to wish everyone:

Happy New Year! May your every day be joyful!

Vampire Motto: “More than sharp teeth and dangerous claws, beauty is the most powerful weapon.” 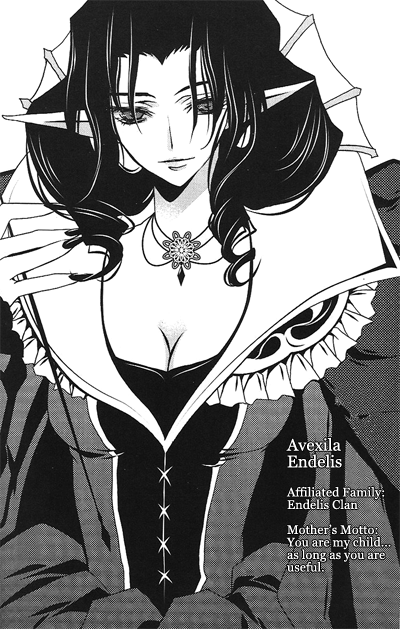 Mother’s Motto: “You are my child… as long as you are useful.” 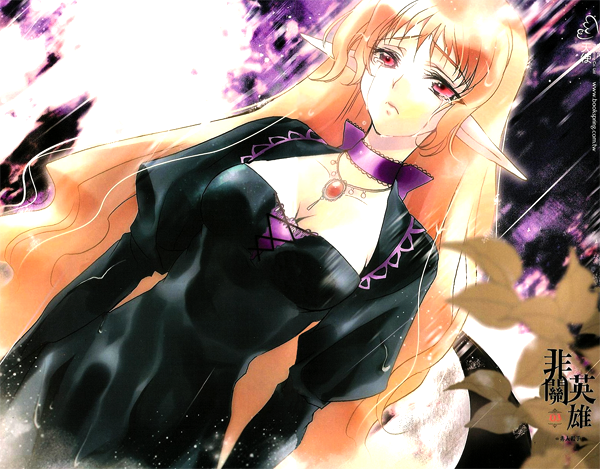 2 “5 volumes”: Although Yu Wo had plans for 5 volumes and then 6 volumes, she was unable to finish writing the story in 8 volumes. No Hero ends in 9 volumes, with the 9th and final volume released in 2015.